Photochemical reactions are that reaction which take place by absorption of UV-Visible light radiation. The range of UV-Visible range in the electromagnetic spectrum is 2000 to 8000 Angstrom.

Photochemistry is mainly governed by two fundamental principles. One is the Grotthus-Draper law and another is the Stork-Einstein law of photochemical equivalence.

As mentioned earlier, there are two ways that energy can be supplied to the molecules. Changing the temperature first results in a continuous increase in energy. Second, a molecule can absorb a quantum of energy from electromagnetic radiation. Thermal chemistry and photochemistry are formed as a result of these two modes of energy input.

If the light of a different frequency is sent through the sample, it will pass through with no loss of intensity because the molecules will not absorb it. However, if the correct frequency of light is passed into a sample, molecules will use that energy for electron promotion, and the light that leaves the sample will be reduced in intensity or completely absent. The fate of excited molecules after the absorption of light is described by the Jablonski diagram. Similarly, to determine the efficiency of the photochemical reaction, quantum yield is calculated.

Differences between Photochemical and chemical reaction 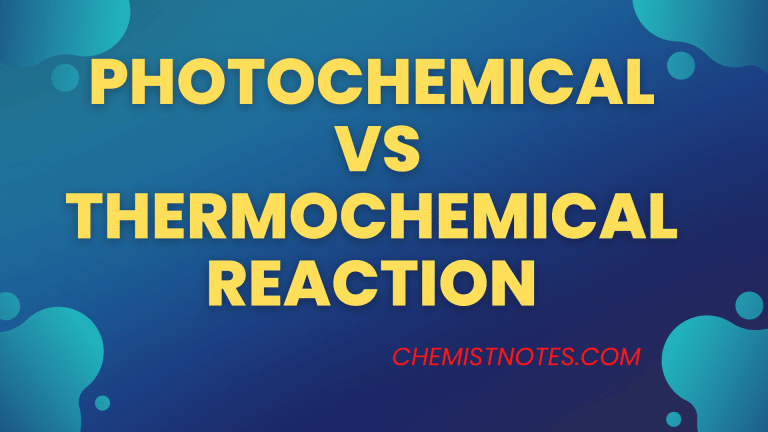 Rabin Budhathoki is currently pursuing his Masters Degree in Chemistry at Tribhuvan University. Alongside, his excellent academic achievements during his undergraduate years, he has been currently engaged in various Research Projects. His passion for naturalistic studies is well reflected in his involvement in seminars and discussions in scientific forums.

Stereoselective reactions and stereospecific reactions: Definition and some examples